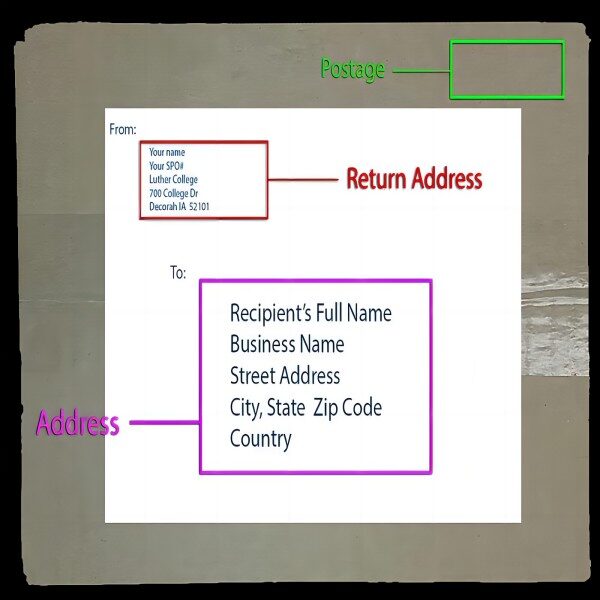 At a time when people are more and more accustomed to using modern text messages, emails, and other forms of communication that do not require stamps, it does not mean that everyone has completely abandoned the warm tradition of using letters for holiday greetings. But it is undeniable that there are still many things to pay attention to when sending a letter. For example, a question everyone will be concerned about is: Can I put a stamp anywhere on an envelope?

Where do I attach the stamp to my envelope?

Why do you have to put a stamp on the envelope’s upper right corner?

When postage stamps were first issued in 1847, the question of how they were used and where they might have been placed was a big problem, at least for some time. But at that time, the placement of the stamps was not that important, as postal workers inspected each envelope in person.

Things started to change in the 1890s when machines were introduced to the USPS to aid in the manual cancellation process. (Note: Manual cancellation is black-marking the stamp to prevent it from being reused later.) Once the machine came along, the Postal Service needed to establish a set of rules and decide to place the stamp in the upper right corner, as it correlates to the advantage of the mail handler being right-handed.

Although the post office has upgraded its machines, they now use optical scanning, which means that stamps no longer need to be in a particular position. So if you don’t follow the rules of the system, according to USPS spokesperson Sue Brennan, “If you don’t follow the guidelines, your letters won’t be dropped, but using them can speed up processing and subsequent delivery.”

Of course, there are some special cases, such as some large and misshapen packaging that makes the upper right corner of the stamp challenging to use. So as long as the stamps are in logical locations and grouped, the USPS allows for some wiggle room.

The location where the stamp is pasted has a different meaning behind it. An upside-down stamp means “I love you”. The stamp is a bit incongruous and means “I miss you”. In the Victorian era, for example, young lovers would send an upside-down stamp to show their affection for the recipient. If the stamp is sideways, it means the sender is not interested. Today, prison inmates use similar systems to keep certain information private from those viewing their mail.

The various stamping methods make the letter more than just a piece of paper; it is a personal expression, conveying a little emotion along with their ancient text messages. At the same time, you need to understand that you can deviate from the usual stamp rules – but don’t expect your letter to arrive at the speed of light.

Will the postage be affected if the stamp is damaged?

As long as the stamps affixed to the mail can be verified as legitimate postage, they are valid forever. USPS will use its sole discretion in determining the condition of stamps. Small corner tears or wrinkles are not a problem, but if the major area of the stamp is torn, missing, or not visible, the postage may not be acceptable. Secure the stamp to the envelope so it does not tear or fall off. This means that if you tape an old, dirty-looking stamp to the letter, it will most likely be rejected. However, if the stamp is in clean condition and adhered to, you can send a mail with it. The large, misshapen packaging makes the top right corner of the stamp difficult to use. The USPS allows some wiggle room as long as the stamps are in logical locations and groups.

Where can you buy stamps?

Before you find the right place to put a stamp, the most important thing is to know where to buy postage stamps. Yes, is it cheaper to get a book of stamps? Is it cheaper to buy a roll of stamps? What kind of stamp do I need to buy? Questions like these are things you need to think about.

If you would like to buy some stamps, your local post office is a good place to start, but you don’t have to do it yourself—you can order from the US Postal Service’s website. Grocery stores, pharmacies, and similar retailers also often sell stamp booklets. But we recommend you to go to some boutique stamp sites like foreverstampstore to buy. You can enjoy enough discounts, and you can also find a lot of two-ounce stamps issued in previous years that you can’t find on the USPS, so you don’t have to worry about queuing. You can enjoy the most without leaving home. Excellent service.