Besides Christmas stamps, what other holiday stamps does the USPS issue?(update in 2022)

We all know that the USPS issues a lot of Christmas stamps so that we can make our cards more Christmassy and send Christmas cards. But are there other holiday stamps issued for other holidays besides Christmas? What do they look like?

Using  US Post Office Holidays, 2022, we can clearly see that the United States government has established ten holidays, and let us see what these festive stamps look like 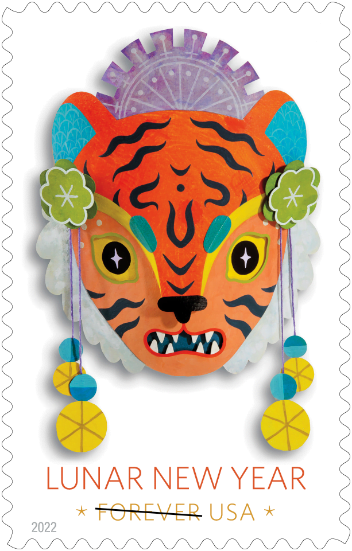 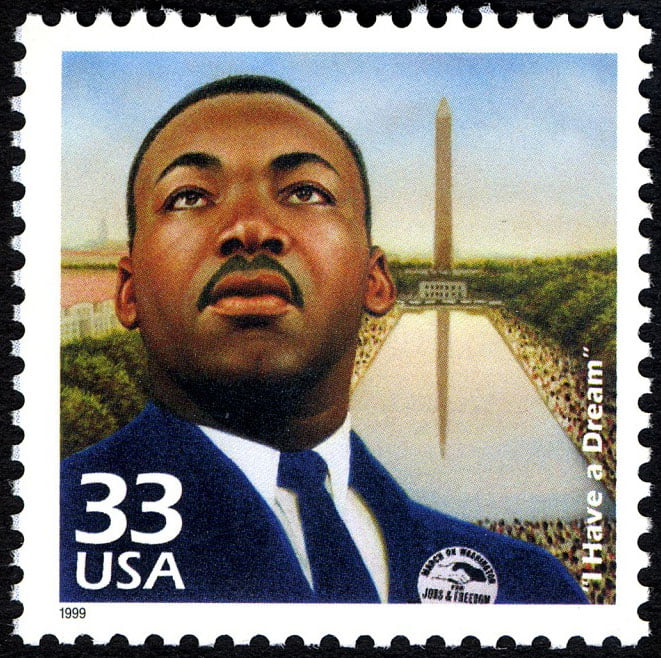 It is celebrated on the third Monday in January and is a nationwide vacation. In honor of the great contributions of this American Baptist minister, activist, philanthropist, and leader of the African-American civil rights movement, King was honored on two U.S. postage stamps and his image is used as the focal point on a 10-stamp block dedicated to the civil rights movement. King was first honored on a U.S. postage stamp as the second design in the then-new USPS Black Heritage series. His stamp was issued on January 13, 1979, one year after the Harriet Tubman commemorative stamp. By the way, since 2011, all new commemorative First-Class Mail rate stamps have been one-ounce Forever stamps. Since 2014, all new stamps for the one-ounce First-Class Mail rate have been definitive stamps. 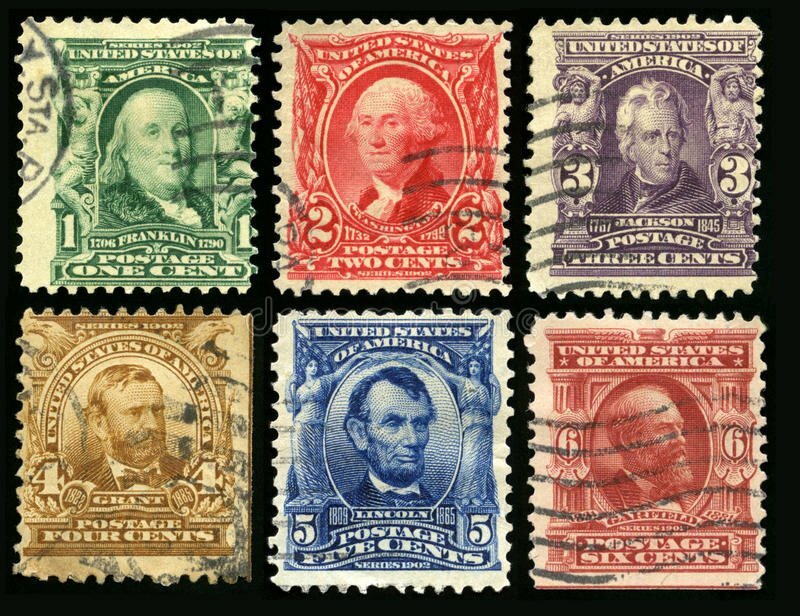 Celebrated to honor the United States presidents. American presidents were honored with stamps long ago. It was and is one of the main subjects for philatelic issues, especially in the United States. In 1847, the U.S. Post Office issued its first two stamps featuring leaders such as George Washington and Benjamin Franklin. The first issues of the presidents were definitive stamps, but later commemorative stamps also appeared on the market. Attractive stamps with the images of presidents include such outstanding politicians as George Washington, Benjamin Franklin, Thomas Jefferson, Andrew Jackson, Abraham Lincoln, etc. It should be noted that the United States Postal Service traditionally issued stamps in honor of deceased or seriously ill presidents. Later, this tradition was changed and the portraits of American presidents appeared for the first time on the stamps of the USA for completely different reasons. And one of the Most Valuable U.S. Stamps is the 1847 Issue Block of 16  Ben Franklin stamps. 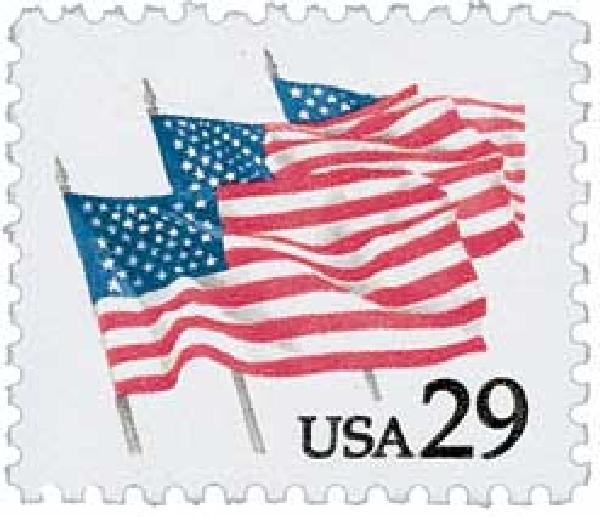 The first major vacation of the year after New Year’s Day is dedicated to the memory of Americans who fought for the country and died in wars. The Postal Service issued its 29-cent “Flags on Parade” stamp on May 30, 1991, in Waterloo, New York, the birthplace of Memorial Day. The village of Waterloo held the nation’s first Memorial Day in 1866 to honor local soldiers who died in the Civil War.

On July 4, 1776, the United States declared its independence from Great Britain. This is a very important day in the history of the United States. When I think of it, the first thing that comes to mind is the smell of a barbecue, fireworks, and of course the Stars and Stripes and the sounds of “America the Beautiful.” Let us not forget Will Smith and the famous science fiction blockbuster. But what about the 4th of July stamps? In 1869, nearly 93 years after the Declaration, the first Independence Day stamp was issued. The stamp’s central motif was the signing of the Declaration of Independence and included 42 figures, the 6 most important of which were depicted on the right side of the stamp. In 1926, a 2-cent stamp was issued. It commemorated the 1926 Sesky Centennial International Exposition in Philadelphia to celebrate the 150th anniversary of the signing of the Declaration of Independence. Two more 4th of July stamps were issued in 1959 and 1960. Both had the same face value of 4 cents and a similar design. In addition, both stamps have 11 perforations.
On July 4, 1976, Independence Day in the U.S. Bicentennial year, the United States Postal Service issued a 13-cent stamp titled Declaration of Independence, printed in a continuous horizontal design across four stamps (Scott 1691-1694). The design was by Vincent E. Hoffman and depicts the first painting completed by John Trumbull for the Capitol Rotunda in Washington, District of Columbia. 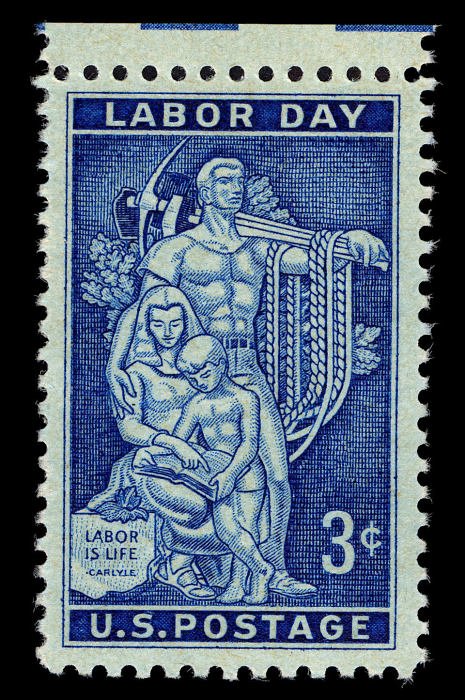 Labor Day commemorates the American labor tradition. Many people go away on this long weekend. It is usually the last vacation before it gets cold in many parts of the country, and many stores have big sales this weekend. The Post Office Department issued a commemorative stamp in honor of American workers – the “Labor Day” stamp – on September 3, 1956, in Camden, New Jersey. 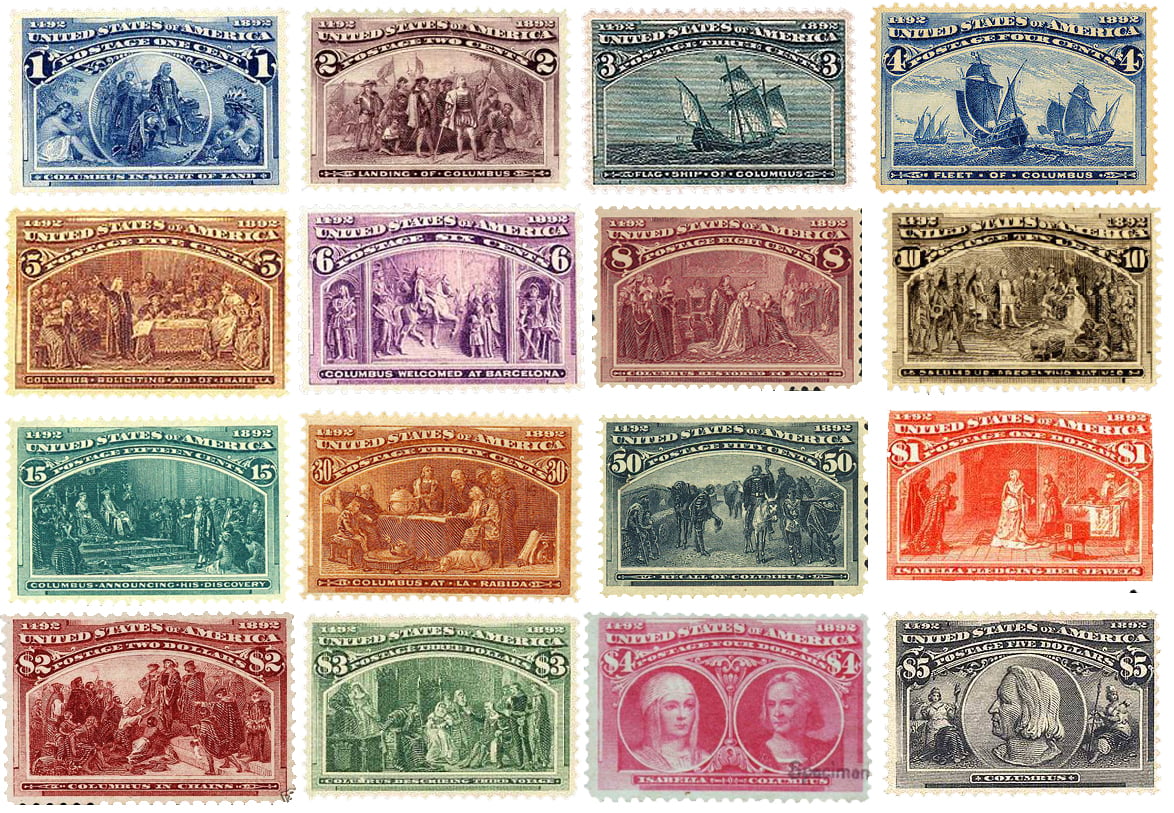 It celebrates the discovery of America by Christopher Columbus on October 12, 1492. America consists of the continents of North and South America. The stamps, which also have a reference to Columbus, are a set of 16 stamps issued by the United States， named as Columbian Issue, also known as the Columbians, to commemorate the 1893 World’s Columbian Exposition in Chicago. The stamps are available in 16 denominations ranging from $1¢ to $5. These intricately engraved stamps are the first commemorative stamps issued in the United States and depict various events from the career of Christopher Columbus. 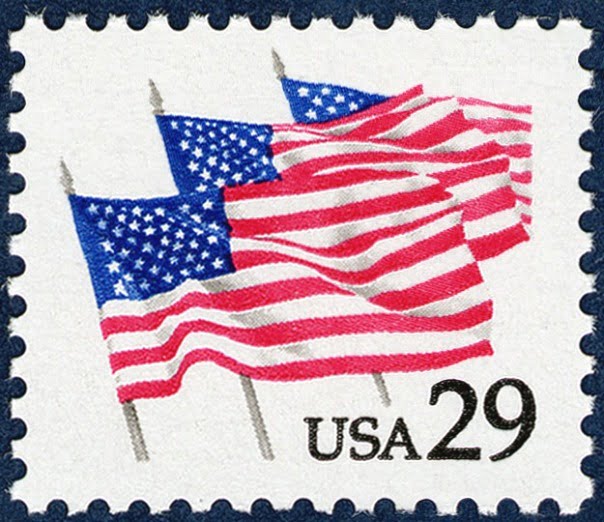 It honors veterans who fought for America in various wars. The stamp commemorating this anniversary is the 29-cent “Parade Flag” stamp issued May 30, 1991.

On May 30, 1991, the 125th anniversary of the first Memorial Day, the United States Postal Service issued the “Flags on Parade” stamp to commemorate the birth of Memorial Day. Stamps depicting flags were so popular that stamp designers decided to depict flags in a new way. Choose from three flags waving in the wind. The design was then changed so that the three flags passed by like a parade, attracting attention. The stamp itself does not specifically mention the anniversary, but the postmaster felt that the ceremony on the first day and the Waterloo postmark were a fitting tribute to Memorial Day. To commemorate Veteran’s Day, the special Medal of Honor stamps, which were issued on Nov. 11.2013, special-issue Medal of Honor stamps issued on November 11, 2013, be introduced in a new format, the Prestige Folio. Each “Medal of Honor: World War II” contains 20 definitive stamps, which always have the same value as the current first-class stamp. 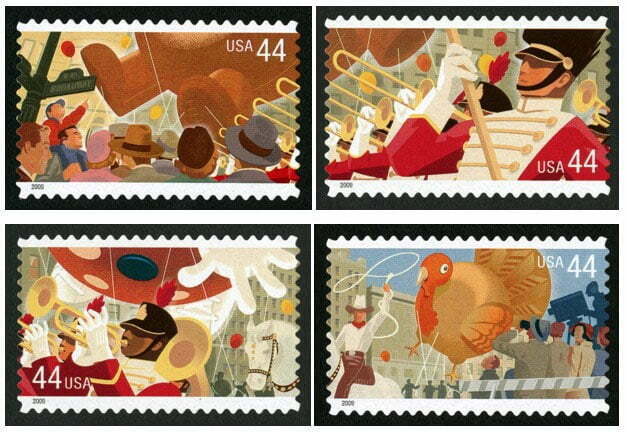 Thanksgiving is a major holiday and technically the longest paid vacation most people get. Thanksgiving began when the Pilgrims (early settlers) in Massachusetts survived the harsh winter of 1621 with the help of Native Americans (called Indians) who helped them learn how to catch eel and grow corn. In 1863, at the height of the Civil War, President Lincoln issued his own proclamation on October 3 declaring the last Thursday in November as Thanksgiving Day. Pray especially for those who lost loved ones in the war and “heal the nation’s wounds.” The first Thanksgiving celebrated under Lincoln’s proclamation was Nov. 26 of that year. Thanksgiving continued to be celebrated on the last Thursday in November until 1939 when President Franklin Roosevelt scheduled Thanksgiving a week earlier to boost retail sales during the Great Depression. Americans were outraged and called it “Franksgiving.” Two years later, he changed his policy and signed a law setting Thanksgiving for the fourth Thursday in November.

The Thanksgiving Day Parade has become an American tradition. The Macy’s Thanksgiving Day Parade® is one of the most iconic annual parades in American cultural lore. This New York City parade—complete with a myriad of giant balloons, dancers, floats, cheerleaders, marching bands, clowns and celebrity performers, and, of course, Santa Claus—ushers in America’s holiday spending season.

To commemorate this memorable parade, on September 9, 2009, the United States Postal Service (USPS) issued a stamp consisting of four bars reminiscent of a typical Thanksgiving parade. The four stamps are crowd, musicians, turkey balloon, and drum major. They can stand alone or be put together to show a colorful panorama of the Thanksgiving parade. 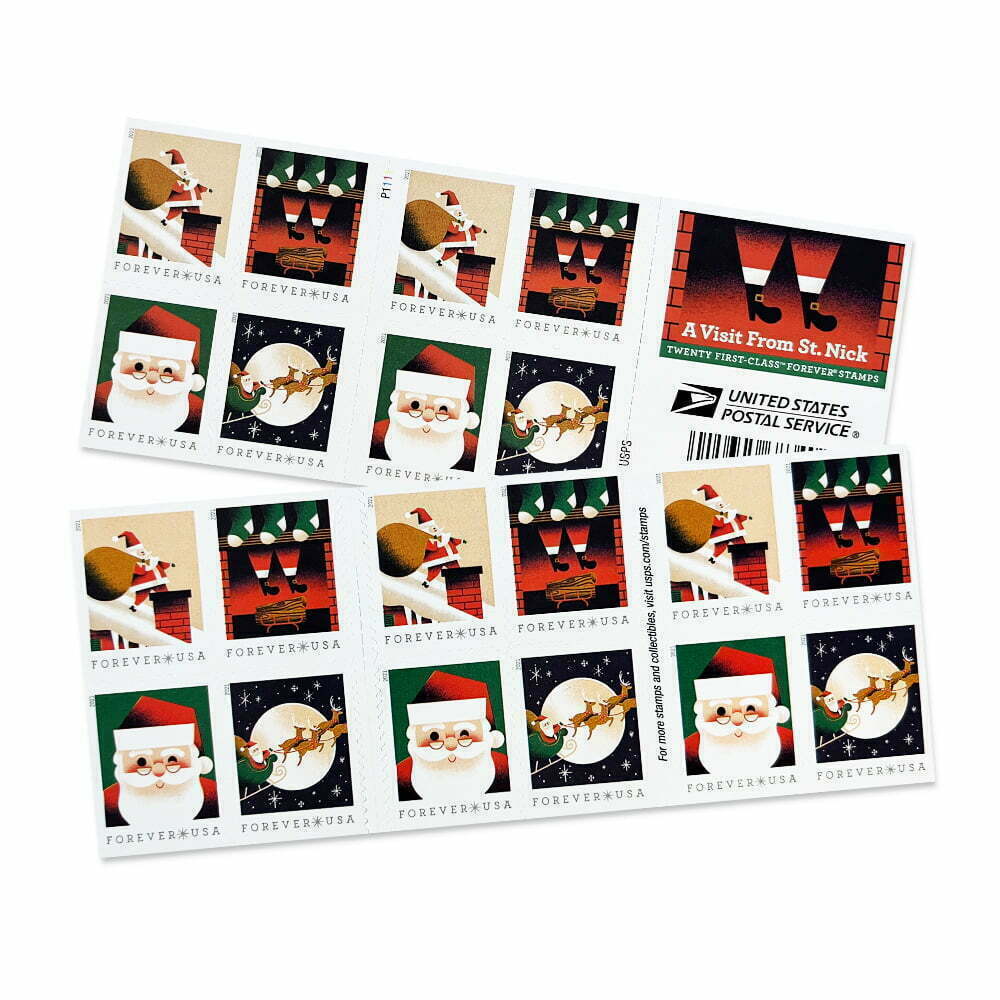 Christmas celebrates the birth of Jesus Christ. Since the majority of the U.S. Population is Christian, this is the most important vacation of the year. However, many non-Christians also celebrate the vacation in the spirit of giving to others. Therefore, the designs of Christmas stamps are mainly divided into secular and religious. Christmas stamps come in a variety of designs, from religious depictions of the birth of Christ to secular designs such as Christmas trees, garlands, Santa Claus, and more.
On November 1, 1962, the United States Postal Service in Pittsburgh, Pennsylvania, issued the first Christmas stamps. Often serving as “job stamps” for Christmas, Christmas stamps are used in large quantities to mail greeting cards and postcards. These stamps are usually normal-sized and are offered in one or more denominations to cover various national and international exchange rates, for example.
Christmas is a popular theme for thematic collections. Almost all Christmas-themed stamps are readily available and cost little due to the number of prints. So the challenge in collecting is to get a cover with the appropriate postal markings, e.g., with a Christmas postmark (not all post offices are closed) or from a specific location (e.g., Christmas Island; Christmas in Florida; the North Pole in Alaska); North Pole, New York; or Santa, Indiana), or with a specific Christmas theme or slogan.

Do you like this article? Leave your comment and let me know what you think about it.

How to Pick Your Wedding Stamps(update in 2022)

Halloween Stamps: Yes, You Can Also Buy Them To Spice Up 2022 Halloween(update in 2022)