Purple Heart Stamp: Besides Movies, There are still 11 forever stamps(update in 2022)

Purple Hearts film is a 2022 American romantic musical film created for Netflix and directed by Elizabeth Allen Rosenbaum. But the first Purple Heart stamp was first issued in 2003, the day before the United States entered World War I. The first Purple Heart was awarded to MacArthur.Besides Movies, There are still 11 forever stamps you need to know.

What is the purple heart?

The Purple Heart award is a heart-shaped medal within a gold border, 1+3⁄8 inches (35 mm) wide, containing a profile of General George Washington. Above the heart appears a shield of the coat of arms of George Washington (a white shield with two red bars and three red stars in chief) between sprays of green leaves. The reverse consists of a raised bronze heart with the words FOR MILITARY MERIT below the coat of arms and leaves.

On August 7, 1782, George Washington established this award (originally called the Badge of Military Merit) to be presented to soldiers for commendable deeds. It was awarded to only a few soldiers during this time and was forgotten until it was reinstated on Washington’s 200th birthday, February 22, 1932. It is believed that the award is purple because the color represents courage and bravery. Therefore, the Purple Heart Medal is purple. The Purple Heart is the oldest military award that is still given to soldiers who have been wounded or killed by enemy action while serving in the U.S. Military. The National Purple Heart Hall of Honor estimates that 1.8 million Purple Hearts have been awarded since its reinstatement in 1932. To commemorate the brave men and women who were either wounded on the battlefield or made the ultimate sacrifice, Purple Heart Day was first observed in 2014 and is now held every year on August 7.

A Quick Look at the History of the Purple Heart

To commemorate the great sacrifice of servicemen and women in war and to honor and recognize those who have received this distinction, the U.S. Postal Service® continues to honor the sacrifices of the men and women who serve in the U.S. Military with the issuance of the Purple Heart stamp, first issued in 2003 and reprinted each year between 2006 and 2009.

In 2011, the stamp was redesigned to include the ribbon at the top. However, the 2015 Purple Heart stamp was the first to include a microprint (the U.S.P.S. Appears on the upper left side of the ribbon). The 2019 Purple Heart Medal stamp shows the medal suspended from its purple and white ribbon.

The Purple Heart is the oldest military award in the world still in use. It is also the first award given to the lower ranks. General George Washington ordered the establishment of a badge for meritorious deeds on August 7, 1782. He wrote: “The road to glory in a patriotic army is thus open to all”. So keep in mind this purple heart stamp has significant national and political importance. 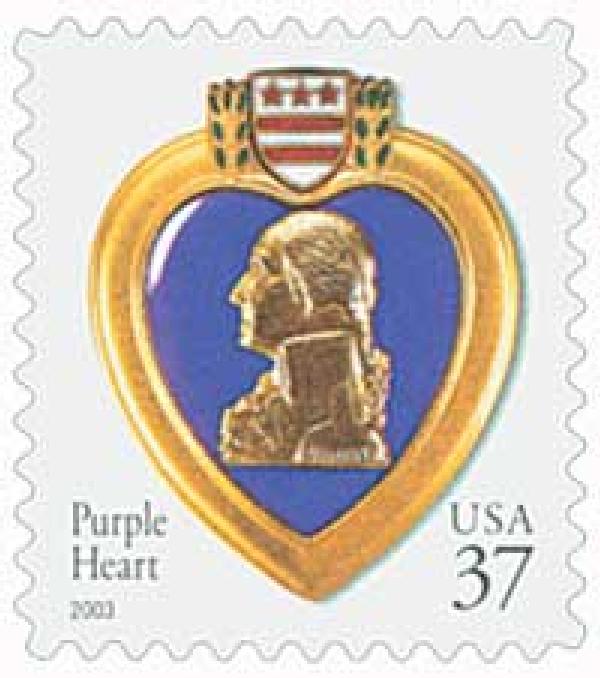 The first Purple Heart stamp was issued first in 2003, in Mount Vernon, Virginia, at George Washington’s Mount Vernon Estate and Gardens, at the first-class letter rate of 37¢. A 37¢ die-cut variety was issued on August 1, 2003. 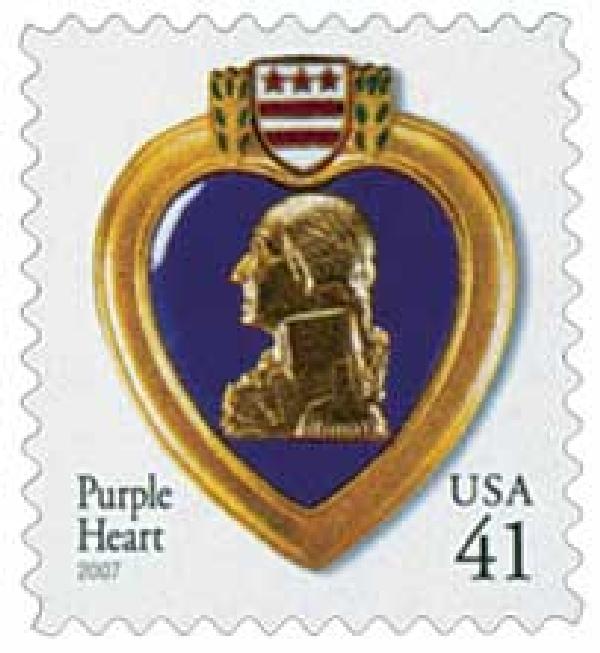 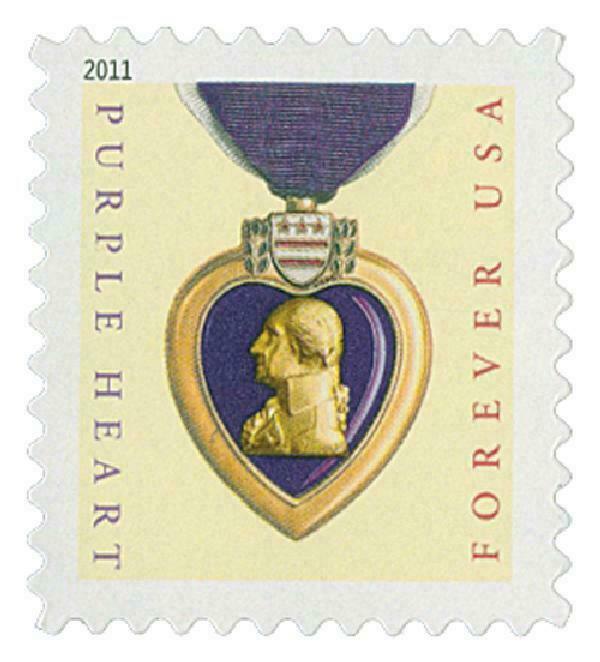 The new stamp, designed by Jennifer Arnold of Washington, D.C.D.C., features a photograph by Ira Wexler of Braddock Heights, Maryland, of Yale’s first lieutenant during World War II, Arthur J. Rubin (1917-1978) being awarded the Purple Heart. In awarding the Purple Heart, the U.S. Postal Service® once again honors the men and women who serve in the U.S.U.S. military. 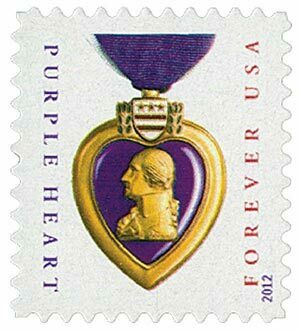 In 2012, the U.S.P.S. reissued the Purple Heart stamp design, including the ribbon at the top, at a 45¢ 1-ounce first-class letter rate. 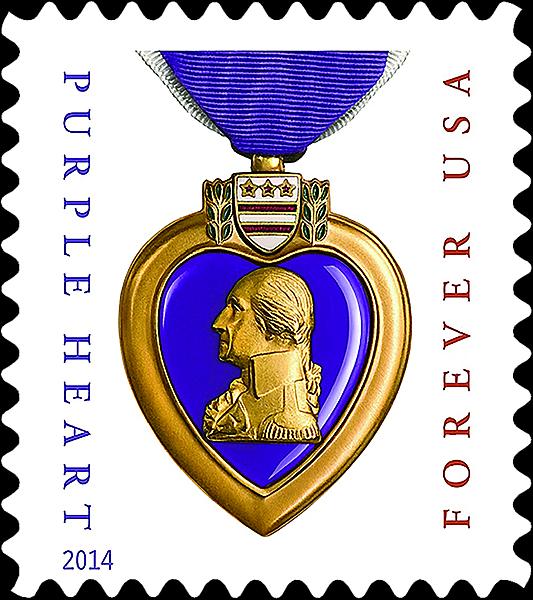 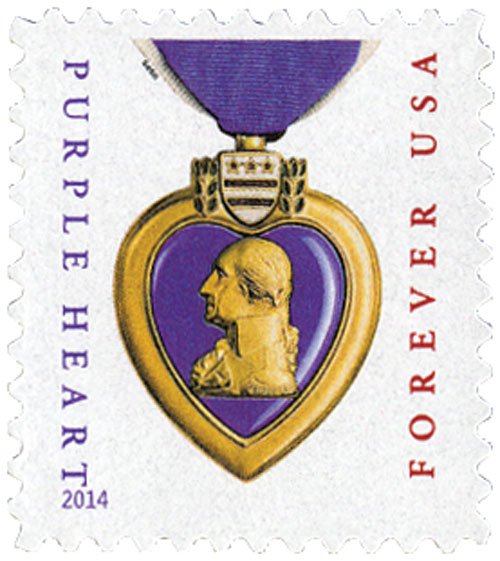 The 2015 49¢ Purple Heart forever stamp was the first to include microprinting (U.S.P.S. appears along the top-left side of the ribbon). 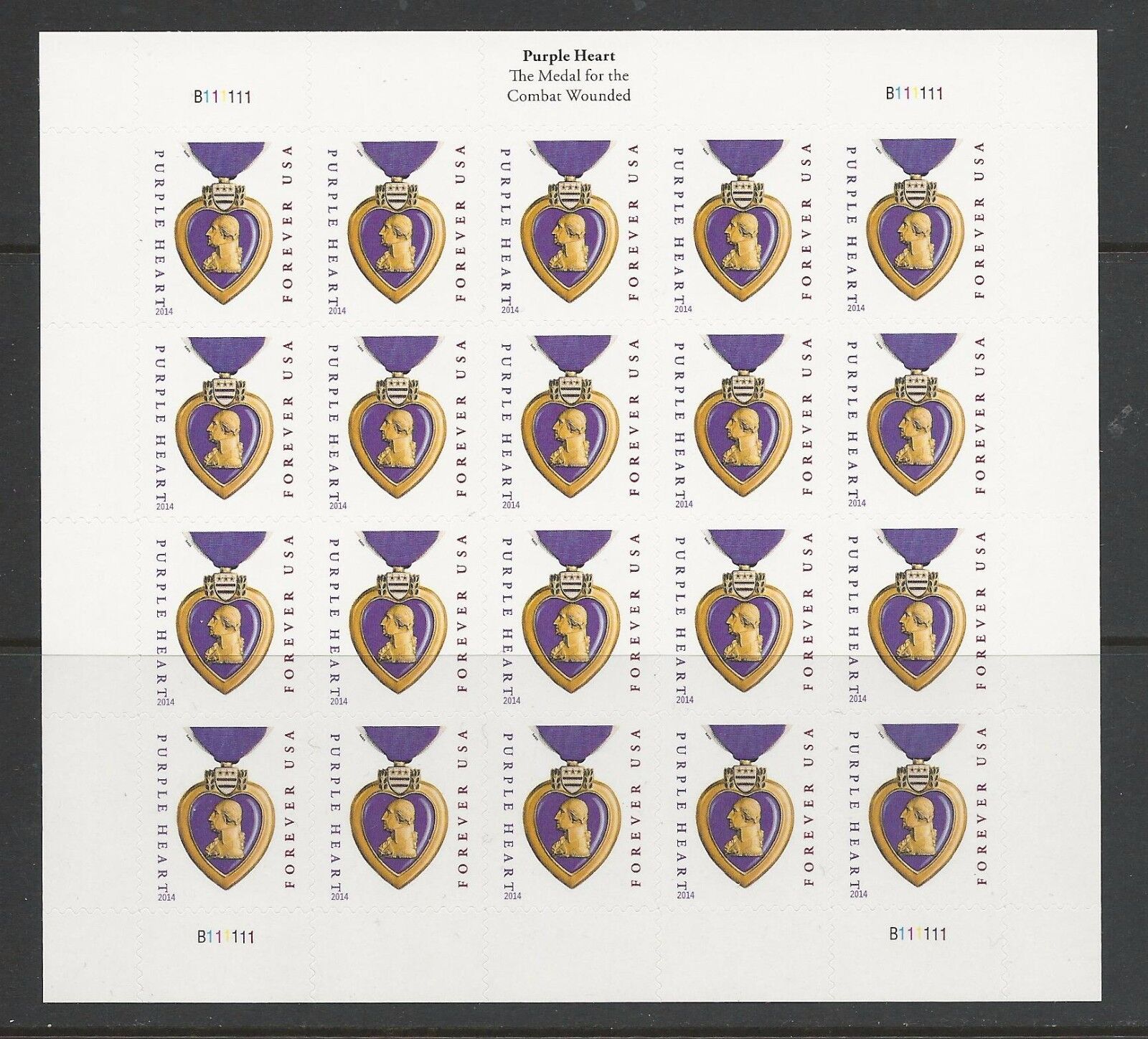 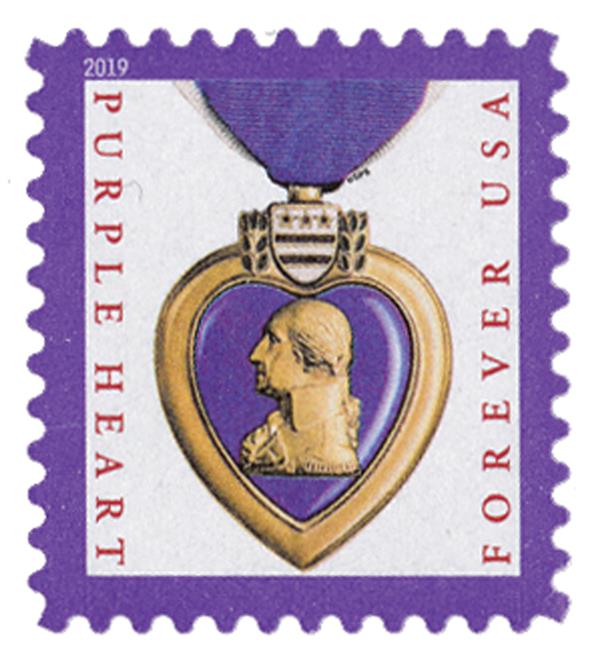 In 2019， Purple Heart Forever Stamp got a new look at a 60¢ rate. This Forever stamp will always be equal in value to the current First-Class Mail® one-ounce rate.

No redesigned Purple Heart Forever stamps have been issued since 2019, September 2022. Do people always want to know if Purple Heart stamps are still valid? The answer is yes. Because, like all USPS. stamps, the Purple Heart Edition stamps never expire. If your stamp is still sticky and in good condition (i.e. not torn or ripped), feel free to use it when mailing. It’s also worth noting that Purple Heart Forever stamps issued in 2012 or later will postage regardless of the current rate or purchase price. As “Forever” stamps, they always have the same value as the current First-Class Mail postage for one ounce. Even if you have an older version of the Purple Heart stamp (i.e., a dollar-value stamp), you can still use it, but you will need to add additional postage to make up the difference.

Halloween Stamps: Yes, You Can Also Buy Them To Spice Up 2022 Halloween(update in 2022)

Postcard Stamp: Beyond the busy life there should be a sense of rituals

Where can I buy stamps? The most comprehensive guide for you to purchase stamps

Your Guide To Global Forever Stamp, Postage Rates And Sending Mail From the U.S.